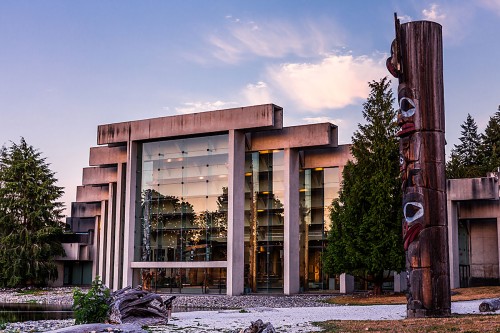 Join us for the conclusion of our two-part series exploring the work of artist Lawrence Paul Yuxweluptun, and our last event of the 2015-2016 season.

Karen Duffek, Curator of Contemporary Visual Arts and Pacific Northwest Art at the Museum of Anthropology, will give a tour of Lawrence Paul Yuxweluptun’s exhibition Unceded Territories.

Vancouver artist Lawrence Paul Yuxweluptun, of Coast Salish and Okanagan descent, is showcased in this provocative exhibition of new and existing paintings, drawings, sculptures, and installation works that confront the colonialist suppression of First Nations peoples, and the ongoing struggle for Aboriginal rights to lands, resources, and sovereignty. Twenty years since his last major Canadian solo show, Unceded Territories will demonstrate the progression of Yuxweluptun’s artistry and ideas through hard-hitting, polemical, but also playful artworks that span his influential 30-year career.

As part of the exhibition, an accompanying full-colour publication featuring essays by guest writers and selected works by Yuxweluptun will be available in May 2016 at the MOA Shop.