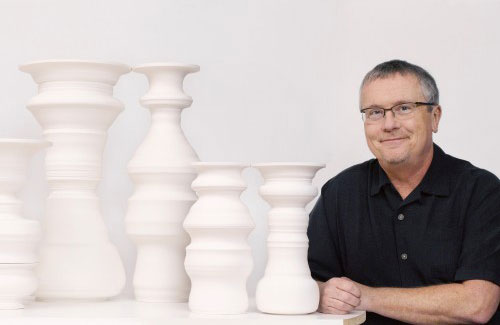 Presented in partnership with the Audain Faculty of Visual Arts and Material Practice at Emily Carr University, this is also a Visual Art Forums event.

Time: 6pm – 7pm (Reception for Greg Payce and CASV members will follow after the talk)

Reception Location: details for the reception will be emailed privately to CASV members.

Greg Payce has been making ceramics for over 50 years. He has exhibited his work in over thirty solo, and over one hundred and ﬁfty group exhibitions in Canada and abroad. He has presented lectures and workshops nationally and internationally. His practice has been reviewed in over ﬁfty publications. His work is included in numerous public and private collections. He received the Governor Generals Award for Media and Visual Arts – Saidye Bronfman Award for Fine Craft in 2013.

In 2004, Payce began to collaborate with composers and photographers to produce videos that animate the negative spaces between his ceramic forms. He also recently began working with lenticular photographic technology to produce large-scale re-mediations of his ceramic works. These works were featured in a solo exhibition entitled. Greg Payce Illusions, at the Gardiner Museum in Toronto in 2012. Payce has completed numerous large-scale public commissions utilizing forms generated from his ceramics. SSSSSSSSSSSSSSS, a large-scale bronze commission, was installed in the Calgary International Airport in 2003. Wane, a ceramic installation, was placed in the Canadian embassy in Seoul, Korea in 2005. In 2010, he completed the turned- aluminum work, Healing Garden for the Lois Hole Pavilion at the Royal Alexandra Hospital in Edmonton. He is currently on a Canada Council senior artist grant to undertake research and make work towards a comprehensive career exhibition at the Art Gallery of Medicine Hat in 2017.

Payce lives and works in Calgary, Alberta. He is currently Professor Emeritus at the Alberta College of Art and Design where he was a faculty member in Ceramics from 1988 until 2015.