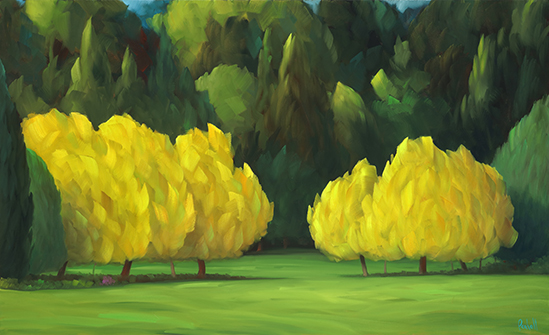 Please join us for an exhibition tour of Ross Penhall: Coming into View.

Ross was born on June 16, 1959 in West Vancouver, British Columbia. His parents provided
incredible support to their budding young artist who displayed an early affinity for drawing and
designing. Ross attended West Bay elementary school and graduated from Hillside secondary
school in 1978. He credits art teachers, Fred Duel and Dorte’ Froslev for providing a solid art
foundation and for guiding his skills for what would become a viable career path.

Following graduation, Ross attended the studio art program at Capilano College and studied print
making with internationally renowned print maker Wayne Eastcott. Ross continued his education
in extra-sessional studies at the Emily Carr College of Art, and when not at the firehall, by
tirelessly reading and working in his studio.

Ross Penhall credits the work of artists A. J. Casson and the Group of Seven, Edward Hopper,
Grant Wood and Wayne Thiebaud for inspiring his quest to explore the architectural space and
light of the landscape. Additionally, the rhythmic shapes and colours in the work of Georgia
O’Keefe have also been a strong influence. Nevertheless, the greatest influence on Ross’s life
and art has been living in the high-contrast hillsides of Vancouver’s North Shore.

Ross is a disciplined and prolific artist who has exhibited annually since 1995. His work can be
found in numerous private, corporate and public collections in the United States and in Canada.
Ross is the father of two adult children, Sam and Sophie, who have been a source of support and
inspiration to his art career. Ross currently paints from his studio in Vancouver and lives with his
wife, Caron, and his dog, Howie, in Horseshoe Bay, BC.