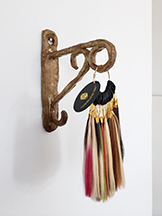 This is a CASV members-only event.

Please join us for a preview of new works by Jeremy Laing at WAAP.

In what we call the West, under what we call capitalism, it can be startling when things without breath appear to come alive. This might be because we are surrounded by more manufactured things than we have been, with these things being at least once removed from the human hand, made with the aid of machines, or with the aid of artificial intelligence that moves these machines. If in the past we were grounded to the thing-world through what Karl Marx has called the labour theory of value, where we could gauge the worth of something through the amount of socially necessary work required to make it, accelerated capitalism erases the (often exploited) labour that drives it. The result is a kind of haunting. “Man [sic] never knows how anthropomorphic he [sic] is,” wrote Goethe a few centuries ago.

In 1946, George Orwell made fun of art writers who use phrases such as “living quality” to describe artwork. He thought it was meaningless. Yet it is true that Jeremy Laing’s work has a living quality and that this is meaningful. Laing’s things look alive because either they look like other things that are made and manipulated by human hands in order to help things function, or because they look like other things that are alive. Sometimes, both. Laing has been working in ceramics lately to create hard, glazed anchors for the soft parts of his sculptures. Some of these ceramics resemble large buttons, which serve the partial purpose of reminding us what buttons actually do, in addition to decorating—hold things together. Other ceramics are oversized hooks, and they do the thing hooks do, hold things up, but they are not hidden as hooks often are.

Yes, it is queer. The soft parts go through and over the hard parts, which they resemble. The insides are on the outside. Laing uses the rope from cushion welting (lumpy, intestinal) to thread his ceramics. A dog toy is deployed as a readymade to look like a pair of low-hangers. And et cetera. “I never wanted to paint but hoped… that I might become an objet trouvé in the world of art,” wrote Quentin Crisp, whose old mattress ticking was, months after his death, made into a coat by fashion designer Miguel Adrover. If Laing’s works could talk, they might clap in approval.